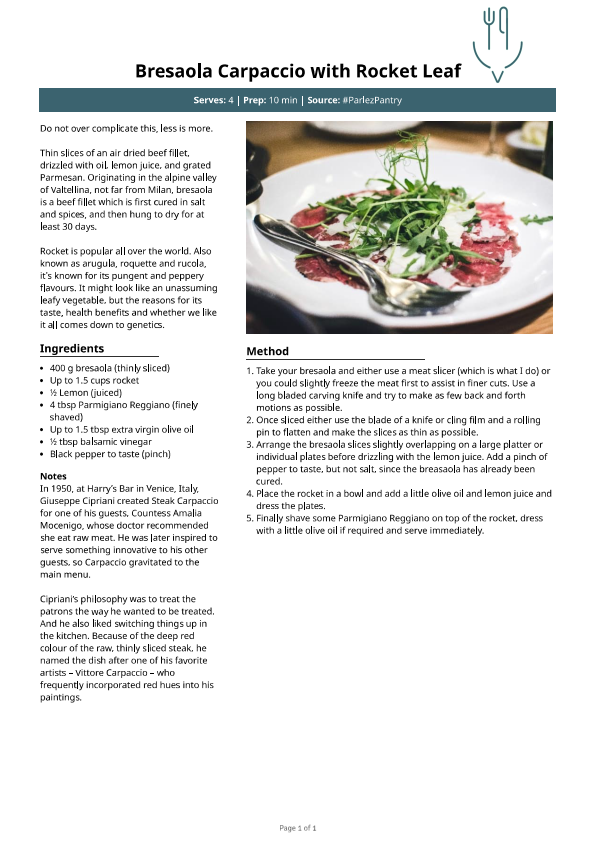 Thin slices of an air dried beef fillet, drizzled with oil, lemon juice, and grated Parmesan. Originating in the alpine valley of Valtellina, not far from Milan, bresaola is a beef fillet which is first cured in salt and spices, and then hung to dry for at least 30 days.

Rocket is popular all over the world. Also known as arugula, roquette and rucola, it’s known for its pungent and peppery flavours. It might look like an unassuming leafy vegetable, but the reasons for its taste, health benefits and whether we like it all comes down to genetics.

In 1950, at Harry’s Bar in Venice, Italy, Giuseppe Cipriani created Steak Carpaccio for one of his guests, Countess Amalia Mocenigo, whose doctor recommended she eat raw meat. He was later inspired to serve something innovative to his other guests, so Carpaccio gravitated to the main menu.

Cipriani’s philosophy was to treat the patrons the way he wanted to be treated. And he also liked switching things up in the kitchen. Because of the deep red colour of the raw, thinly sliced steak, he named the dish after one of his favorite artists – Vittore Carpaccio – who frequently incorporated red hues into his paintings.

Download the .pdf from this link: Bresaola Carpaccio with Rocket Leaf