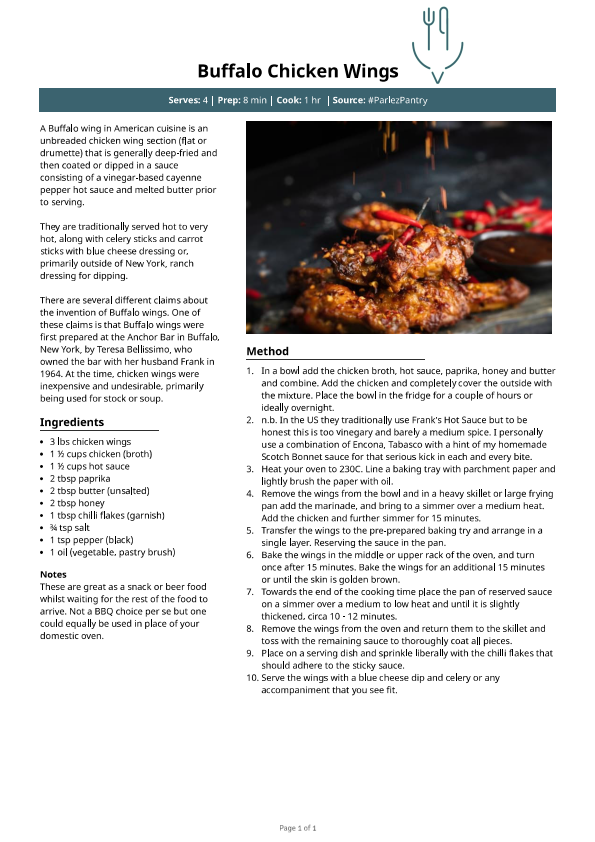 A Buffalo wing in American cuisine is an unbreaded chicken wing section (flat or drumette) that is generally deep-fried and then coated or dipped in a sauce consisting of a vinegar-based cayenne pepper hot sauce and melted butter prior to serving.

They are traditionally served hot to very hot, along with celery sticks and carrot sticks with blue cheese dressing or, primarily outside of New York, ranch dressing for dipping.

There are several different claims about the invention of Buffalo wings. One of these claims is that Buffalo wings were first prepared at the Anchor Bar in Buffalo, New York, by Teresa Bellissimo, who owned the bar with her husband Frank in 1964. At the time, chicken wings were inexpensive and undesirable, primarily being used for stock or soup.

These are great as a snack or beer food whilst waiting for the rest of the food to arrive. Not a BBQ choice per se but one could equally be used in place of your domestic oven.

Download the .pdf from this link: Buffalo Chicken Wings