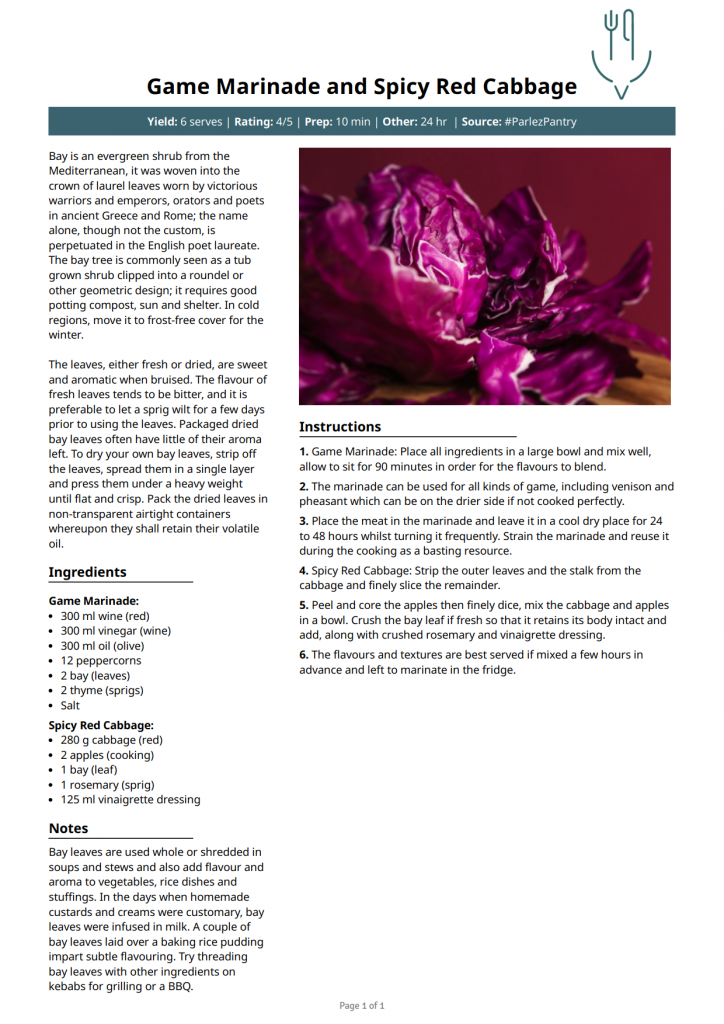 Bay is an evergreen shrub from the Mediterranean, it was woven into the crown of laurel leaves worn by victorious warriors and emperors, orators and poets in ancient Greece and Rome; the name alone, though not the custom, is perpetuated in the English poet laureate. The bay tree is commonly seen as a tub grown shrub clipped into a roundel or other geometric design; it requires good potting compost, sun and shelter. In cold regions, move it to frost-free cover for the winter.

The leaves, either fresh or dried, are sweet and aromatic when bruised. The flavour of fresh leaves tends to be bitter, and it is preferable to let a sprig wilt for a few days prior to using the leaves. Packaged dried bay leaves often have little of their aroma left. To dry your own bay leaves, strip off the leaves, spread them in a single layer and press them under a heavy weight until flat and crisp. Pack the dried leaves in non-transparent airtight containers whereupon they shall retain their volatile oil.

Bay leaves are used whole or shredded in soups and stews and also add flavour and aroma to vegetables, rice dishes and stuffings. In the days when homemade custards and creams were customary, bay leaves were infused in milk. A couple of bay leaves laid over a baking rice pudding impart subtle flavouring. Try threading bay leaves with other ingredients on kebabs for grilling or a BBQ.

Download the .pdf from this link: Game Marinade and Spicy Red Cabbage